Why Competition Works For Me

I am highly competitive. It’s a curse and it’s a blessing.

One way or another I’ve been competing at something since I was about three years old when I was slapped on the back of a fat, hairy little pony and told to sit up straight and stop whining.  Some days the burden of having to constantly test myself becomes, quite frankly, a little old. Those are the days it really does feel like a curse, days when I would much rather just say to hell with it and put my feet up or go to the pub.  Competition has brought me immense joy, broken bones, traction, heartache and headaches and it has taken me places I never thought I would go, meeting some extraordinarily talented and fantastically gifted people.

It’s not that I have to win—that’s the bonus— but without the focus competition brings, I get lazy and drift round aimlessly or I fall into my Catherine Wheel mode—more frenetic but equally as unproductive—as I go off in way too many directions all at once, achieving absolutely nothing.

Competition for me, is about going the distance and it’s about what I can learn throughout the process and that’s the blessing.

One of the things which attracted me to the Whittaker Prize was the way the competition was structured.  Nine rounds with feedback from the judges after each round and a breakdown of how they had arrived at my score. For a writer working alone like me, I considered this to be an absolute must-do competition and set everything else to the back burner in order to take part.

Scoring out of 100, the points were available like this:

I am always a little twitchy about submitting my work because it goes in cold—stone cold—nobody other than myself reads it and it gets very hard to achieve a proper perspective. I have yet to find a F2F writing group within a reasonable distance and nobody in my immediate family ever reads my work – sometimes this is probably another blessing (for all of us).

The information which came back to me through my Whittaker scores was, I believe, invaluable.  Over nine rounds it really helped me get a handle on where my weaknesses are and certainly threw out a couple of surprises.  I scored far better in some areas  than I expected but one area was consistently weaker than the rest and both judges highlighted it: my endings were way poorer than every other category.

It was time to try and get some professional help. Firstly I sent two of my early round pieces out for a full professional critique to the very talented Nik Perring at The Story Corrective. Not only did I get a fantastically comprehensive critique, I also got a wonderfully speedy turn around and some very positive and encouraging feedback worth its weight in gold from a writer of considerable talent. Those stories have already gone back out into competition.

The second thing I did which I had been meaning to do for quite a while was cast myself into the very capable and wise hands of a mentoring program with John Dean at Globalwriters. See the October issue of Writer’s Forum to learn more about John or head on over to the welcoming community of Globalwriters.  We’re in the early stages but already I feel I’m making real progress.

Throughout the year, one thing I have refused to miss is my date with the highly addictive and completely frantic half hour of writing in the weekly live Write-Invite competition.  It’s fast, furious and fantastic,  it’s hang onto your hat, seat-of-the-pants writing and win or lose, I love it.  I have come away from it with some real gems which have developed sometimes into much longer stories. It is through Write-Invite that I have fallen in love with and been both inspired and not a little intimidated by, very short stories or flash fiction.

I could say a whole lot more here, actually quite a lot, but instead of me talking, I’m pleased to announce that Rob Richardson, host and creator of Write-Invite has very graciously granted me an interview which will be appearing on this blog later this week.

Nobody was more astounded than I was when I won the 2010 Whittaker Prize for fiction, there were some very talented writers in the competition and it came down to a nail-biting finish. I tip my hat in their direction because they challenged, motivated, encouraged and inspired me every single step of the four months we were locked in literary combat. So fierce a bunch of competitors were they that I knew there could be no laurel-resting for me. Instead  I decided to invest my prize money right back in my writing before I could blow it at the bookshop or indulge myself in my other weakness—needle work stash expansion. Neither would truly have been a bad option but, I’m happy to say I bridled the temptation and instead have used the funds to immerse myself in the Fish Publishing Flash Fiction course under the tutelage of Mary Jane Holmes. Again in the early stages I’ve already learned a great deal about this very challenging genre.

At the end of this week The Slingink Scribbling Slam starts for a whirlwind six rounds and I’m really looking forward to getting started.  Until then I’m polishing off some of my needlework and heading over to the annual craft competition at the horticultural show in my village.  After all, I’m a sucker for a good competition! 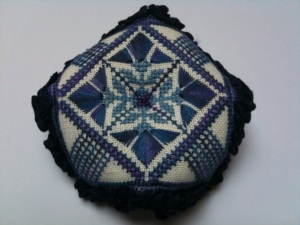 My Tweets
Join 1,586 other subscribers