When people ask me about my dog, they pretty much always do a double take when I say he’s a Plott Hound. When I tell them Plott Hounds are the state dog of North Carolina, they look even more bemused and when I tell them that Plotts are the ‘ninja warrior of dogdom’ (which is the enthusiasts’ description), people look at me like I’ve lost a complete grip on reality.

So, along with this photo/video montage, I thought it was time to record what I know about Plott Hounds of which I have had the massive good fortune to have shared part of my life with two: Digger (originally known as Arlo–the one with the really big ears in the montage), by way of a rescue centre in Boston, MA and Willie (originally and accurately known as Tank) from the Lucy MacKenzie Humane Center , West Windsor, Vermont.

Willie, aka Plottdog to his friends, came to me in 2007 from the LucyMac Center when I lived in New York. He made the trip to Vancouver as part of our short-lived move there in 2009 via Kentucky, Kansas and a boatload of other places, (we were driving under the snowline in February). We travelled with his best friend and constant companion, Patch (the black and white terrier in the montage) who sadly died at grand age of 18 when we were in Seattle; he never got to see Vancouver. We still miss him–more than I can say.

When I had to return to the UK, Plottdog made the trip all the way back to New York, this time via the coast roads of Oregon and California and along what’s left of Route 66 back to the East Coast. One of the hardest things I’ve had to do was wave him off at Le Guardia in Newark, NJ knowing he had a six months stretch in quarantine ahead of him, but with regular weekly visits and masses of love he made it through the process.

So what’s the deal with the breed? What exactly is a Plott Hound aside from being North Carolina’s official State dog?

The story I have heard is that the breed originates from five dogs —a gift from his father, Elias, a gamekeeper near Heidelberg, Germany to Johannes Plott on his emigration to North America around 1750. On settlement in the mountains of North Carolina, Johannes continued to develop the breed as wild boar hounds.

Elias Plott had originally bred the dogs to hunt big game and as work as farm and herding dogs. It is believed that the elder Plott used the Hanoverian Hound and he may very well have mixed in the Weimaraner. Today the descendants of these dogs are one of only four breeds known to be truly of American origin (the American Kennel Club recognized them as a distinctive breed in 1998).

They remain much prized for their as courage as hunters and tenacity as trackers (the tracking I can certainly attest to – Plottdog can smell out a bacon sandwich at 500 metres) and these days are often used for hunting and treeing Black Bear (the closest Plottdog has come to this is treeing next door’s cat). They don’t bark, they bugle – a noise which is both extremely loud and somewhat comical. It has been variously commented upon by both friends and perfect strangers as sounding a little like a sea lion with laryngitis. In full voice though it can be deafening and sometimes a little spine-tingling.

There an area, just south of the Great Smoky Mountains and bordering the Blue Ridge Trail in the Southern Appalachian Mountains of Jackson County known as the Plott Balsams originally owned by Johannes and his family. Although we visited nearby Sylva, NC, sadly we never got to see the Plott Balsams, but it would really have been something — it is a beautiful part of the world.

Plotty is getting on a little now but he has settled down to his life here in England, he has made some great friends in our neighbourhood canine and human alike, and still enjoys his long walks in the countryside together with the odd bacon sandwich. 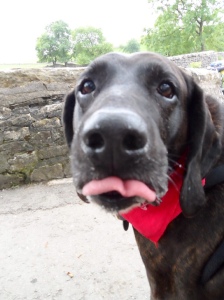